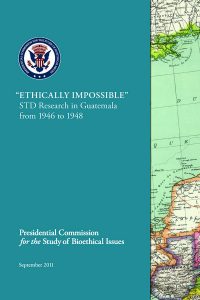 In an 82-page opinion yesterday, a federal judge permitted the claims of more than 800 Guatemalan victims of non-consensual human experimentation, represented by Bekman, Marder, Hopper, Malarkey & Perlin, to proceed against Defendants, Johns Hopkins, The Rockefeller Foundation, and Bristol-Myers Squibb.

The Plaintiffs’ class action claims arise from human experiments conducted in Guatemala in the 1940s.  The victims, including children, soldiers, prisoners, and individuals in asylums, among others, were intentionally infected with syphilis and other venereal diseases in order to study how those diseases were transmitted and spread.  The experiments were sponsored by the U.S. government, but Plaintiffs allege that the design and implementation of the experiments was entirely the work of non-governmental physicians, namely, high-ranking senior doctors and decision makers at Johns Hopkins Hospital, The Rockefeller Foundation, and Bristol-Myers Squibb in the 1940s.

The victims were never told that they were infected, most were not provided any treatment for the diseases, and they unknowingly passed the lifelong diseases onto their spouses and children.

The Judge’s ruling denies Motions to Dismiss filed by the defendants.  The Judge ruled that the Plaintiffs’ Complaint makes sufficient, plausible claims under the U.S. Alien Tort Statute that the Defendants aided and abetted in the commission of non-consensual human experiments from 1947 to 1954.

“The decision is a significant win for our clients,” said Gregory Hopper, a lawyer at Bekman, Marder, Hopper, Malarkey & Perlin.  “This decision allows them to proceed against the private institutions whose employees organized, planned, and implemented these experiments.”

The case will now proceed to the discovery phase, where further investigation into the role played by these entities will be explored.

The Court’s opinion can be accessed here.

Academic articles addressing the Experiments can be found here and here.

The Presidential Commission Report about the Experiments, titled, “Ethically Impossible,” can be accessed here.

BMA handles complex cases of catastrophic injury caused by intentional acts, medical malpractice, legal malpractice, personal injury, birth trauma, products liability, and maritime litigation.  We represent the individuals and families affected by the negligence of others.  Call today 410-539-6633 if you or someone you love wants to discuss a possible case.