The plaintiff in the case was a thirty-nine year old woman, who attended a Women’s Business Enterprise National Council (WBENC) convention in Baltimore City in 2013.  After the convention had concluded for the day, she was networking in the lobby bar of the Hilton Baltimore Hotel on Pratt Street.  While talking with a prospective client, a hotel server who was not paying attention, knocked her over, causing her to fall and strike her head on the tile floor. 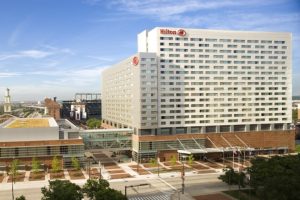 This head trauma caused significant injury, resulting in serious impairment of her memory, focus, and concentration.  These impairments greatly affected her ability to function professionally and personally.  As the CEO of her own IT company, she was unable to manage the company at the level she previously could.

Despite eyewitness testimony corroborating the hotel server’s actions, the server and the hotel denied that the event occurred.

Jeff Quinn took the case to trial before a jury.  After six days of trial, the jury returned a verdict in favor of BMA’s client, awarding $484,643.00 for the lost profits of her business, and $100,000.00 for non-economic pain, suffering, and mental anguish, as permitted by law.

Media coverage of the verdict can be found here: https://thedailyrecord.com/2018/08/29/baltimore-hilton-fall-jury-verdict/

BMA is a plaintiff’s law firm, representing people in all types of  personal injury cases throughout Maryland, Washington, D.C., and Virginia.  BMA seeks to resolve cases, when a fair settlement is offered, but prepares every case carefully and creatively, as if it were going to trial before a jury.