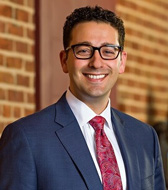 Emily C. Malarkey started at SCBMA as a law clerk and has been an Associate with the firm for eight years.  She has developed a busy practice in the areas of medical negligence, wrongful death, and other catastrophic injury.  She has also established a thriving appellate practice and has numerous published opinions to her name.  Ms. Malarkey is an experienced trial lawyer with multiple verdicts exceeding $1 million.  She has been named a Rising Star in every edition of Maryland Super Lawyers since 2010 and was recently named to the Board of Governors of the Maryland Association for Justice, Maryland’s primary civil justice organization of trial lawyers who represent the injured.  Prior to joining SCBMA, Ms. Malarkey completed an appellate judicial clerkship for the Honorable Sally D. Adkins on the Court of Special Appeals.

Ryan S. Perlin began his legal career at a prominent Baltimore defense firm, representing health care providers and hospitals in medical malpractice claims.  He joined SCBMA in 2011 and quickly established himself as a leading plaintiff’s attorney in medical negligence, wrongful death, and catastrophic injury cases.  He has successfully tried numerous jury trials in courts throughout Maryland, including multiple cases with verdicts exceeding $1 million.  Mr. Perlin was named a Rising Star in 2012 and 2013 and was selected as a Maryland Super Lawyer for 2014 and 2015.  Mr. Perlin has been a member of the Peer Review Committee for the Maryland Attorney Grievance Commission since 2013.  After graduating law school, Mr. Perlin clerked on the Circuit Court for Baltimore City for the Honorable Stuart R. Berger.

Managing Partner, Paul D. Bekman, explained the reasoning behind naming Ms. Malarkey and Mr. Perlin as the Firm’s newest partners.  “We elected Emily and Ryan partners because our clients deserve the preparation, talent, creativity, and work ethic that they have both displayed since first joining the firm.  We look forward to them continuing our firm’s long tradition of excellent representation of our clients with groundbreaking results.”

Since 1945, Bekman, Marder, Hopper, Malarkey & Perlin, L.L.C. has been recognized as one of the premier  law firms handling cases involving medical and professional negligence, birth injury, products liability, car and truck accident, slip-and-fall, transportation, maritime, and insurance litigation for people injured by the unreasonable actions of others.